Want to have a good time, travel to distant places, buy nice things, use latest tech, sound good right? But someone has to make that stuff. If we all worked bullshit jobs and just consumed, soon there’d be nothing to consume. The things we benefit from using surely didn’t come from the consumer class.

What have you decided to work on and why? It feels like most of the people who have the choice do not deliberately make the choice with the intention of contributing to society.1 It’s even more strartling to hear people describing their jobs as “boring but comfortable”. Surprisingly, this accounts for people in STEM fields too where they got used to being just a cog in the machine.

Then there are people on the other end of the spectrum who destroy value. Though they don’t represent the majority and are quite an obvious case unlike the majority. 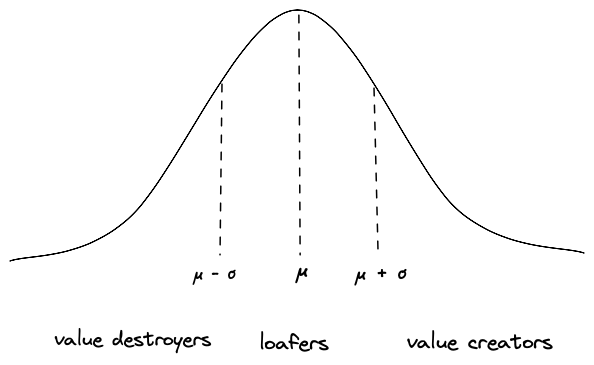 If this phenomenon is normally distributed, how much better off would we all be if we left-skewed this distribution towards value creators? What system needs to be in place so more people make conscious decisions about what they add to the pool?

When I first learned about meritocracy, I wondered where did its implementation fail. Nonetheless, it seemed like the right recepe for a prosperous future created by a higly productive society. Skill and effort replace politics and priviledge, proposing a clear objective function of agents in any environment (from highschool to private/public institutions) levelling the playing field for everyone.

Why can’t governance and private sector work like sports teams? Which are arguably representative of functional meritocracy. Perhaps these places are built around power structures where those in power over other people would become vulnerable.

In any way, meritocracy isn’t much of a silver bullet to value creation. It’s main limitation lies in its very definition - what kind of skill and effort is rewarded? What is productive? Are skilled software engineers optimizing ad revenue useful? Quants, hedge fund managers, “bankers” are all bright minds indeed, do their highly compensated outcomes add value to average Joe? Sadly not.

I believe a new kind of meritocracy with direction is desperately needed. A meritocracy where it’s agents optimize for value add for others. In such case, these agents also indirectly create a positive net value for other uninvolved agents - the environment.

Developing a new technology instead of an ad engine. Spreading truth and helpful information rather than optimising for engagement. Striving to educate than just going through talking points. Producing goods in an honest way before maximizing revenue.. Acts of kindness go a long way and anyone can conduct them at any time, they’re cheap. In such environment, the reciever becomes a more productive producer, better educated, healhtier which makes everyone else better.